First off, Sorry this post is so long but there was no short way to say it all.

For the past six months I have been dealing with health issues. It all started with frequent infections that I couldn't seem to shake for good. I was also having more sinus issues than normal and headaches. I also felt tired often (but I never really use this as a symptom for anything because I feel like who isn't tired often? haha). Anyways I saw probably five different doctors for the infections and was finally told that I would be given a 12 month supply of a prescription and I should just take a pill like clockwork every time I could feel an infection coming on. So for the rest of my life basically I would be swallowing pills and dealing with the side of effects of an antibiotic....something about this seemed messed up so in one last desperate effort I decided to go see a Naturopathic doctor (something that was easier now that I lived in a big city with tons of them). Basically after a variety of tests she ran on me (including allergy test, hormone tests, thyroid, adrenal etc) it was discovered that I had a pretty serious allergy to milk.
An allergy to milk is different than lactose-intolerant. I am literally allergic to the proteins in milk (any kind of animal's milk) and apparently I'd be allergic my entire life but it had slowly gotten worse. My allergy was not the kind that showed itself with rashes or stomach issues like many peoples. An allergy is essentially when your body does not recognize something (in my case milk) and your immune system attacks it. So basically I was constantly forcing my body to be at war and I was quickly tiring myself out and causing all sorts of problems on the side because my entire body had gotten so out of whack. I also was on the verge of developing an allergy to gluten, but it wasn't quite at that point yet. At first I was like "well it's only milk, that's fine, I can live with that". But then when I realized all the things milk were in it started to look very hopeless and depressing (MILK chocolate, butter in anything, cheese! that means cheese ravioli, macaroni and cheese! any kind of cake made with butter!)
My doctor suggested that I go on a cleanse to help "reset" my body. The cleanse would last four weeks. At first all I could think of was the celebrity diets you hear about where they just eat grapefruit and juice or vinegar for days and they lose tons of weight only to gain all of it back when they stop. However she quickly explained to me this cleanse was more about detox than weight loss. I could eat as much as I wanted, but only certain foods. Immediately I began to wonder if this was all worth it (and I might add that before I finally started the cleanse the boyfriend and I went out for Mexican and I proceeded to spitefully consume half a bowl of cheese dip- which later I will confess gave me a headache) It was christmas! and everyone knows the holidays are an intense time of eating haha and baking and candy and I could go on but I will only torture myself haha. Regardless I weighed my options, slowly watch my body fight itself into exhaustion or suck it up for four weeks and try this cleanse. I decided to try the detox cleanse. Initially I wanted to do it on my own by researching a cleanse on the internet instead of paying my doctor for a plan and the supplements but it was all so confusing and most the cleanses I found were about weight loss which is not what I wanted so in the end I chose to do it the safe way with my doctor.
The weirdest part about learning about my allergy was realizing how many people have food allergies. It's kind of scary. There are various controversial ideas on why this is. If it's the toxins were being exposed to or how our food is too modified etc. All I know is either way I don't get to eat chocolate chip cookies haha. Anyways! My main point in posting this was to share some of the awesome resources I've found, I'm still searching so I will be posting more and more but there are a lot of good options for people with food allergies or intolerances. It especially helps if you live in a city because there are more health food stores, vegan bakeries, raw food restaurants etc. Eating right can be costly but in the long run if you do it right it's not that much more expensive and your health should be the thing you want to spend money on. I read somewhere that eating healthy only costs about 2$ more per food group so in the long run, not that much.
Also there are a lot of people (like myself) who have seemingly unrelated medical problems that no one can seem to figure out and then it turns out it's a food allergy and voila problem solved!So if you've been struggling with some health issue or headaches, fatigue etc you may want to do some googling and if it seems to point to a food allergy go to an allergist and talk to them. I felt SO frustrated and helpless because I could not figure out what was wrong with me. I felt like I was going crazy. Even though giving up dairy (and for the most part gluten) and going through this cleanse is going to be tough at east I found out what was going on and that there is a solution.

Here's a link to my Pinterest board in which I've started posting some gluten-free and dairy-free recipes and tips: CLICK!
Also I am going to be posting about my cleanse later and giving tips etc so you can follow it and feel free to join in. Like I said, when I researched cleanses, everything said something different and I didn't feel confident enough to do it correctly without a doctor's supervision. However, I will be posting exactly what my doctor has recommended I do so people essentially can follow along on their own. A detox cleanse is not just for people with allergies but everyone could benefit from a cleanse at some point. It helps "purify" your body of all the crap you've put into it either by eating unhealthy food, or drinking, smoking etc etc. People claim to feel much better afterwards and more "connected" with themselves. I'm not at that point yet, I'll be honest. The only thing I want to connect with is a cheeseburger and a milkshake haha but I do notice that my body is healthier and I can already tell that at the end of this cleanse (2.5 more weeks to go!) I will feel much better and have a clean slate to start my dairy-free life!
Posted by CK at 12:03 PM No comments:

To me, split pea soup has always looked gross haha there's just no way to dress it up (as you can see from my lovely picture here haha-I'm pretty sure my blog wins least appetizing food pictures ever, but its ok I'm getting a decent camera for Christmas. all is not lost) but it always tastes SO good.

Anyways, pea soup is another perfect recipe for leftover ham, so after I made the Chunky Fleechky I used the ham bone to make the pea soup. Apparently you can also get really cheap ham bones from the Honey Baked Ham Co. stores.

It was my first time making it and I used the crock pot again, but there are ways to make it without one (my mom never made it in a crock pot and hers was always delicious). We got to enjoy ours with some of my boyfriend's aunt's homemade bread- SO GOOD. It's also a relatively cheap recipe depending on how fancy you want to get. Ours was pretty basic and still tasted delicious. 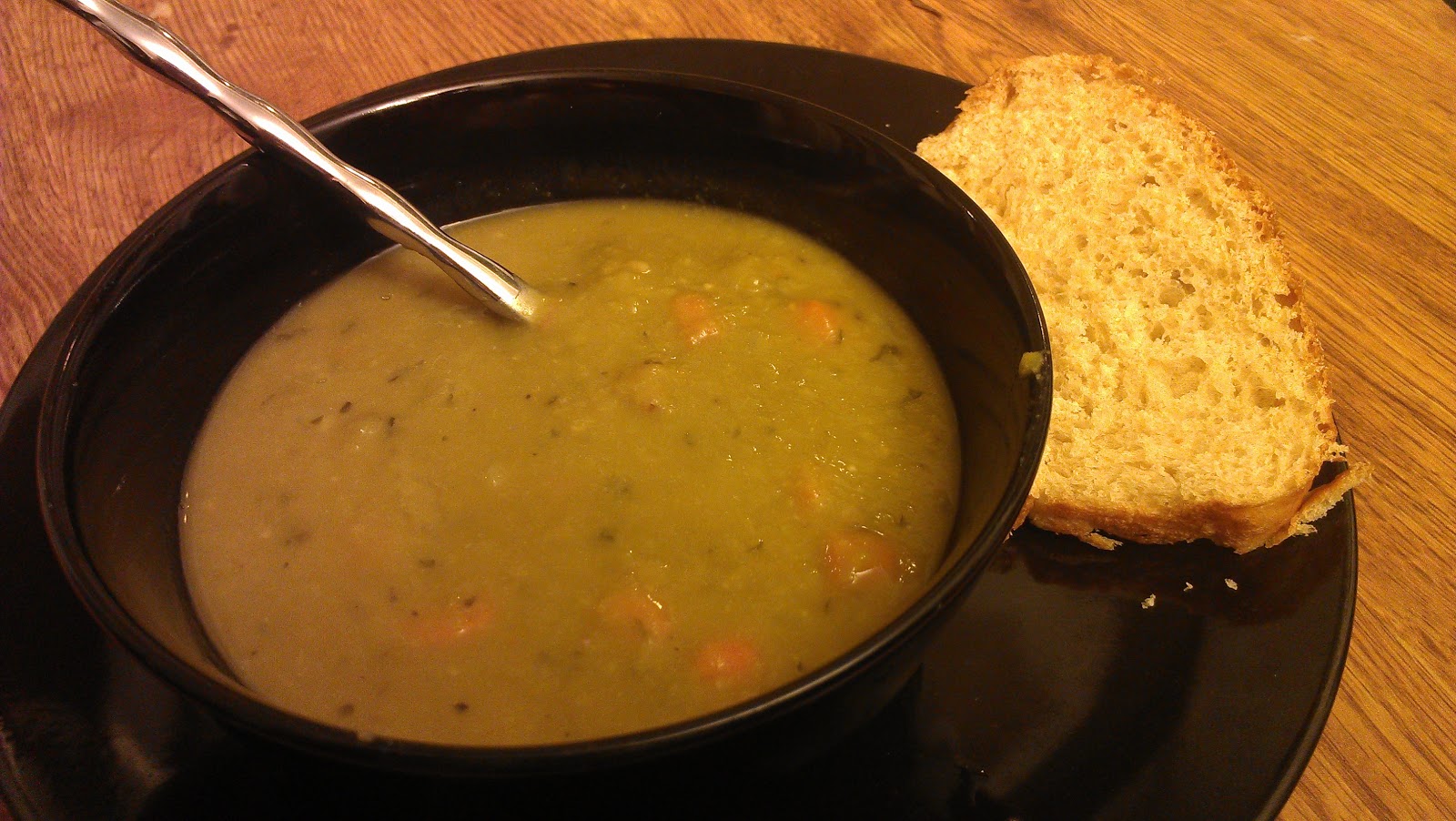 Ingredients:
Steps:
*Something I also learned, when I refridgerated the leftovers they turned almost jello-like in consistency. I just added a little water and stirred and microwaved and repeated until I got the consistency back to somewhat normal*